In 2012, they were to repeat the experience with Elusive, the (bad) magicians movie. The duo eventually pulled out, officially for scheduling reasons – but maybe they just read the script. The soundtrack of great movie Hanacomposed by The Chemical Brothers, is a little gem.

Almost everyone has forgotten this action film directed by Joe Wright (Pride and Prejudice, The Dark Hours, Bang), where Saoirse Ronan is a child prodigy of castagne, educated by Eric Banaand who faces Cate Blanchett as the big bad wolf of the CIA.

Released in 2011, Hana nevertheless met with modest success (budget of around 30 million, and 65 million at the box office), and even gave rise to a series on Amazon Prime.

Among the many reasons to review and always love more Hana : the music, composed by The Chemical Brothers.

When someone tells you they don’t know Hanna

For all people with a minimum of good taste, The Chemical Brothers rhymes with The Dust Brothers (their first name), and especially with music like Life is Sweet, Setting Sun, Block Rockin’ Beats, Galaxy Bounce, Star Guitar, galvanize, hey boy hey girl, believe, GB or Wide Open. Born in the late 80s, the electro duo formed by Tom Rowlands and Ed Simons became a staple in the 90s.

Even before squatting the soundtracks of many films and series (Lara Croft: Tomb Raider, heroes, Skins, xXx, Vanilla Sky…)., the Chemical Brothers had an obvious link with the cinema, right from their music videos. Spike Jonze directed that ofElectrobank in 1997 (with Sofia Coppola in the role of the gymnast), just before exploding in the cinema with her first film, In the skin of John Malkovich. In 1999, Michel Gondry transformed their titles Let Forever Be and Star Guitar in gigantic trips, which announce his feature films to come. They will meet again years later, for the clips of GB and got to keep on in 2015.

And even without mentioning movie names, their music videos, especially those made by their faithful Dom & Nic, are bursting with inventiveness, ideas and memorable images – at random, the poor man chased by a giant robot in believe. The Science of Future Dreams

How The Chemical Brothers landed on the soundtrack of an action movie from the director ofPride and Prejudice ? Joe Wright told birthmoviesdeath in 2011 : “I’ve known them since 1992. I was at a party above a shoe shop in London and it was their first time in London. I’ve been buddies with them for 19 or 20 years now, this which is terrifying, so we know each other well”.

The music was built at the same time as the film, from beginning to end: “Before the shooting, I asked them to compose a few pieces. One of them was this Snow White theme in a bit of a striptease version, for the club. I told them I wanted a twisted fairy tale theme, which could be hissed by the villains during the movie later. I gave them some elements and ideas. Once we had these songs, we played them while we were filming, on a big sound system, and I played their albums to give a rhythm. (…) During post-production, I would send them the rough cut of a scene, they would send me a piece, I would recut the piece, I would send them back, so there was always a dialogue between us”. The big bad wolf of the movie

In short: everything was very simple, and everything is simply perfect since the music and the film have become one.

It is all the more beautiful that this method remains extraordinary. The norm in Hollywood is to work with temporary music (often well-known and beloved soundtrack tracks), slapped on during the edit to help polish it. It is only in a second time that the real soundtrack is worked on and used… to sometimes suffer precisely from the temporary soundtrack, to which the director was able to attach himself. The real predator of the movie

Hana is therefore a wonderful example of perfect synergy (and perfectly cool) between cinema and music, image and sound, staging and composition. The film takes on the air of immense choreography and little opera of the castagne, which alternates between the typical basses of the Chemical Brothers and the theme worthy of a twisted fairy tale.

An example of total pleasure: the interrogation scene which turns into a massacre. Everyone knows it’s going to end badly, and it’s all about the crescendo. Hanna is in place, the team arrives to neutralize her, the agents get excited little by little, the tension rises, and so, the music arrives. The kick-off is given by the opening of the airlock, with this handle which turns and turns like a vinyl… before stopping, and starting the next track – that of the massacre.

The sequel is a game of contrasts: between music and silences, between the cold violence of the heroine and the basses of the Chemical Brothers. The rhythm becomes that of Hanna, perfectly relaxed and at ease in this little war, and who only needs a few puffs of air to execute her enemies. This is a pure shot of pleasure for the senses, on the border between clip and cinema, and which announces the color.

Another scene, another affair, with Eric Bana who distributes the slaps this time. The heroine’s mentor walks on another tempo, and the music will stick to his coattails and his fists.

The scene takes place in three beats, and staging and music go together perfectly. First, the character of Erik, on his guard, spots the henchmen while pretending to walk quietly; and the music builds discreetly, like his strategy. Then he descends into the arena and unbuttons his jacket to prepare; the pace picks up, the machine starts in earnest. Finally, when he begins to attack them, the music takes off, almost in harmony with his blows. Once the last attacker is eliminated, everything stops. The case is folded. The character’s heartbeat raced, the adrenaline surged, and it was over.

In Hana, the characters are conductors of fights and action scenes. And with Erik, the melody is more raw and dry, and it’s a clever mix between music and sound effects (that skate).

the exception that confirms the rule

Hana remains to this day the only film soundtrack of the Brothers. In 2011, Tom Rowlands, one half of the duo, looked back on this unique experience, at MTV News :

“We’ve been offered a lot to do movie soundtracks. Our music has been used in a lot of movies, but we’ve never written anything specifically for that. We always thought it would be fun to try one day, but it had to be the right project. (…) It had to be the right director, someone who wanted a different soundtrack for his film. It was Joe. As soon as we sat down to speak with him, and that he described to us what he wanted, we felt that it was the right moment.”

From the start, the director announces that he does not want typical action film music: “He told us, ‘I don’t want to hear shaky strings as soon as there’s a tense moment.’ He wanted synths in the background instead. It was very liberating to be part of something bigger. Usually, in the studio, it’s always us. We write, we produce, we perform music. It was quite nice to be part of a bigger machine, around someone else’s vision. We have our ideas, but in the end, it’s his film”. 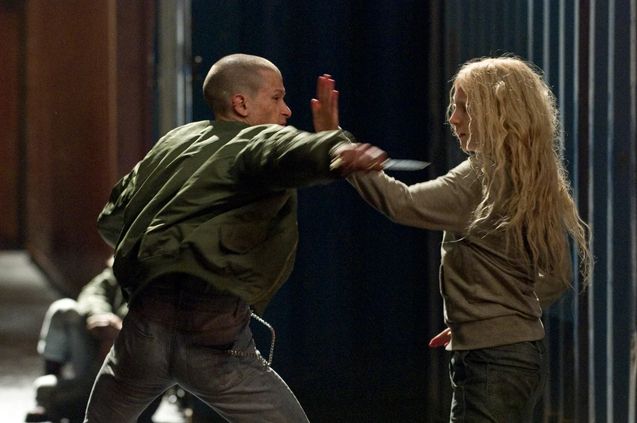 And The Chemical Brothers obviously liked the result: “All the music that’s in the movie is connected to the music we’ve done before, and it’s not something completely unrelated. We continued to make music as normal.”.

In 2012, they were to repeat the film soundtrack experience with Elusive, the (bad) magicians movie. The duo eventually pulled out, officially for scheduling reasons – but maybe they just read the script.

All the more reason to pamper the music of Hanaand consider it as a one-of-a-kind little miracle.